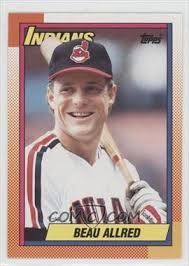 Dale Le Beau Allred (born June 4, 1965 in Mesa, Arizona) is a former Major League Baseball outfielder who played in parts of three seasons for the Cleveland Indians between 1989 and 1991.  Throughout his three-season career, Allred split time between the Indians and minor leagues. He made his major league debut on September 7, 1989.  He played three seasons for the Cleveland Indians between 1989 and 1991. In 1989 he played in 13 games, in 1990 he played in four games, and in 1991 in played in 48 games. In his career, Allred had a batting average of .230 with four home runs and 15 RBIs.  He was immortalized in a 1991 article in Sports Illustrated where writer Steve Rushin revealed several pen-written lines of graffiti in a Cleveland Stadium bathroom chronicling Allred's career: "Shoeless Beau Allred", "Clueless Beau Allred" and finally "Clubless Beau Allred".

Today Beau is the President of Allred's Insurance and Cotton Company, Safford, Arizona