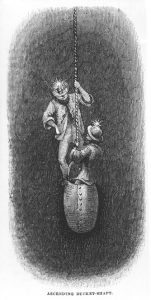 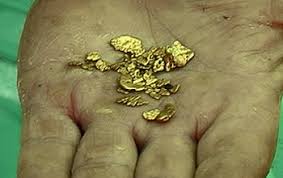 Reuben Allred’s mother was once quoted saying he “was born with gold fever”.  Per articles found in the High Point Enterprise (March 29, 1959) and Greensboro Daily News (August 24, 1952), Reuben’s “gold fever” lasted his whole life.   Below are extracts from those articles.  Please note Reuben’s name was spelled a variety of ways in the two articles.  I kept the spelling the way it was printed.

There is at least one man living here today (1952) who would like the capital and the opportunity to put the Jamestown (NC) mines back into operation.  He is Ruban  Allred, who can still pan you a sample of gold from Bull Run and Reddick’s Creeks.  He and his mother, Mrs. Alverdia (Granny) McGeehee Allred, still have faith in these old mines and believe the old timers “only raked the top off”.  Though all of the good gold ore was dug out of the old mine, Rube tells that his grandfather said at the bottom of the mine is a vein of almost solid copper ore.

Ruban was born with “gold fever” according to Granny.  Perhaps he caught it form the Deep River mine where he was born within “spitting distance” to the main mine shaft.  Or, perhaps he caught it by hearing his father and both grandfathers speak of their days at work in the old mines.   And it is no wonder Rube was born with gold fever.  His father was a gold miner as was his father’s father and his (maternal) grandfather who came up from Montgomery County before the Civil War.

He says that long before his grandfather’s time the gold ore from the area now called Jamestown was hauled by crude oxen-drawn carts along an old buffalo trail to Fayetteville.  There it was loaded aboard boats for shipment to the smeltering plants in England and final delivery to the English owners.

“My grandfather was working in the mine when they blew the whistle to go to the Civil War,” Rube said.  “They asked him whether he wanted to be a soldier or sailor,” Rube continued, “and after thinking a bit he said he wanted to be a sailor.  He had never seen the sea.   So that’s how he served the Confederacy.  He was stationed in Wilmington during the war and when it was over,” Rube said,”he walked all the way home.  He wore out his shoes walking back and made himself some out of a bed quilt.”

There stands yet today the shell of an old rock house – built by the Lindsey Mine operators in 1833 and later owned by the North State firm – that is called the “Engine House” because a steam engine was first used here to operate the mill.  Granny has a ghost yarn about his old rock house.  On the flat stones in front of and below an arched window there are discolorations which resemble blood.  According to Granny Allred, it is the blood of a young Negro slave thrown from the mill to his death on the rocks below by an angry superintendent.

Reuben knows all the old tales and legends about the gold mines in the Jamestown area.  His mother and father, before they died, used to tell about the ghost of Deep River mine.  There was a shaft of the mine which went straight down for several hundred feet.  Once in the old days a miner got mad with another and cut the rope on which he was descending in to the shaft.  He fell to his death.  Rube’s mother used to say that on a certain time each day you could hear the ghostly screams of that man as he plunged to his death and the thud as his body hit the ground.

Though his hair is white and his face is browned and wrinkled with years, Rube is always ready to get his pan and trap through the woods in search of gold.  Admittedly his finds have never been great.  “I don’t reckon I’ve ever panned more than $125 worth all my life,” he says, “It’s kind of a hobby with me – a man needs a hobby.  I didn’t make much money, not as we see it in these days, but back there it was a lot,” Rube said.  He kept this gold in a snuff box.

He still pans a little gold out of Copper Creek, but just for the fun of it.  “If you panned gold down there for a living, about how much do you reckon you could make in a week,” Rube was asked.  “You’d starve to death,” he said, “I don’t reckon you’d make over a dollar a week.”

But Rube still holds firm to the belief that somewhere near the old Lindsey and North State Mines there is rich gold ore for the taking.  “Back in those days,” he said, “they didn’t have the equipment we have today.  They had to do the work by annual labor.”  He believes the old mines have only been “scratched over” and somewhere beneath the earth lie rich veins of gold.  “Only the soft ores near the surface have been removed,” Reuben asserts.  “Below lies great treasure the old miners had to leave.”

The old prospector says that somebody ought to sink some capital in the old mining tracts and find the gold.  He believes that in digging for the gold a modern mining company could sell the worthless rock as crushed stone.  Copper also could be mined and sold until the rich vein was found.  “With good management and capital the old mines could be made to pay large dividends,” the old miner says.

Gold has been an important part of North Carolina’s history since 1799, the date of the first authenticated discovery of gold in the United States.  North Carolina was the nation’s only gold-producing state from 1803 until 1828, and continued as a leading producer until 1848 when gold was discovered in California. Below is some information on gold in North Carolina.

By about 1830, the leading mines in North Carolina were hard-rock mines rather than surface placer operations.   Output probably peaked in the early 1830s and again in the late 1840s. The most famous mines in the South were at Gold Hill, where one shaft eventually reached a depth of 800 feet.  Writer and illustrator Porte Crayon visited Gold Hill in 1857 for Harper’s New Monthly Magazine and created the best surviving images of antebellum Carolina mining.  The federal government built a branch mint at Charlotte which coined southern gold from 1838 until the start of the Civil War in 1861.

The old Gold Mine where Reuben Allred, his father and grandfathers mined gold is still located in Jamestown, NC.  Today it has been transformed into Castle McCulloch, named for an enterprising Cornish engineer named Charles McCulloch who came to the gold fields of Jamestown, North Carolina to build a gold refinery. He brought with him the architecture of England and the latest technological development, the steam engine.   McCulloch Gold Mill was built in 1832 and operated many years as an integral part of the history of Gold Mining in the State and in the Nation.  The original Mill structure also served briefly, as a makeshift hospital for soldiers during the Civil War.

Today, Castle McCulloch is a popular wedding, reception and party venue.  You can also pan for gold and/or visit the McCulloch Mineral and Technology Museum and see minerals and gems from around the world and some from outer space.  For more information about Castle McCulloch visit http://www.castlemcculloch.com